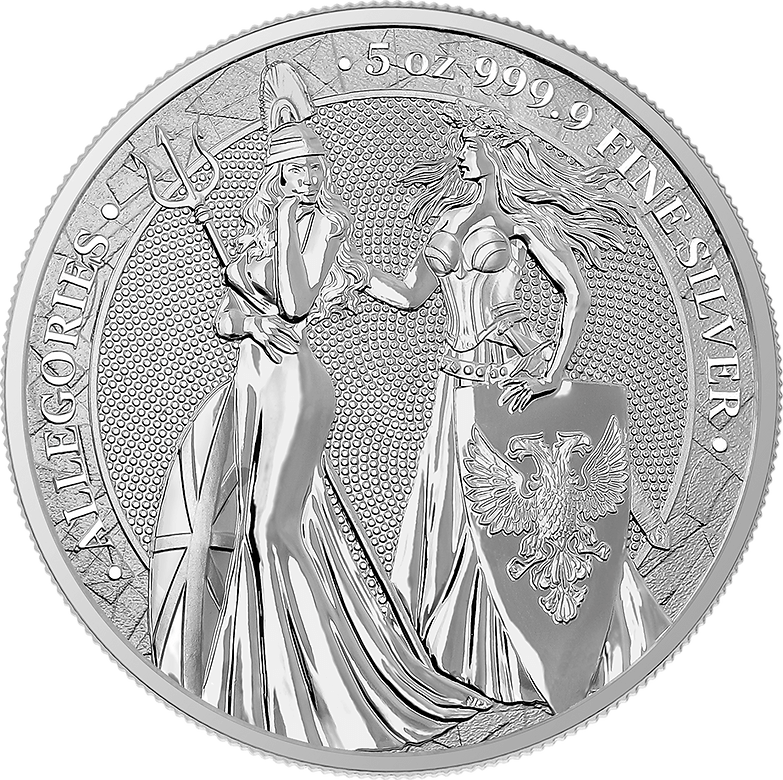 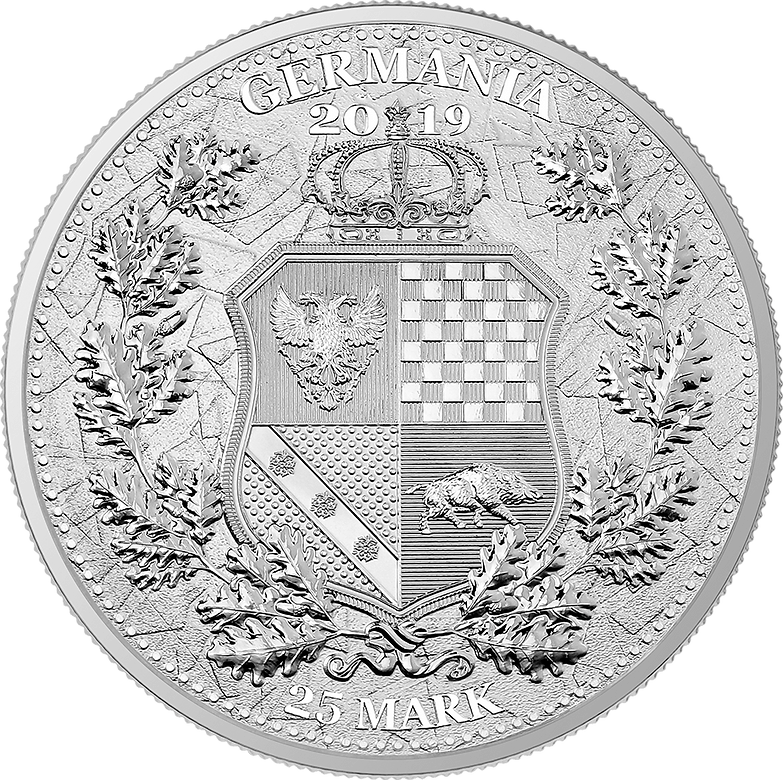 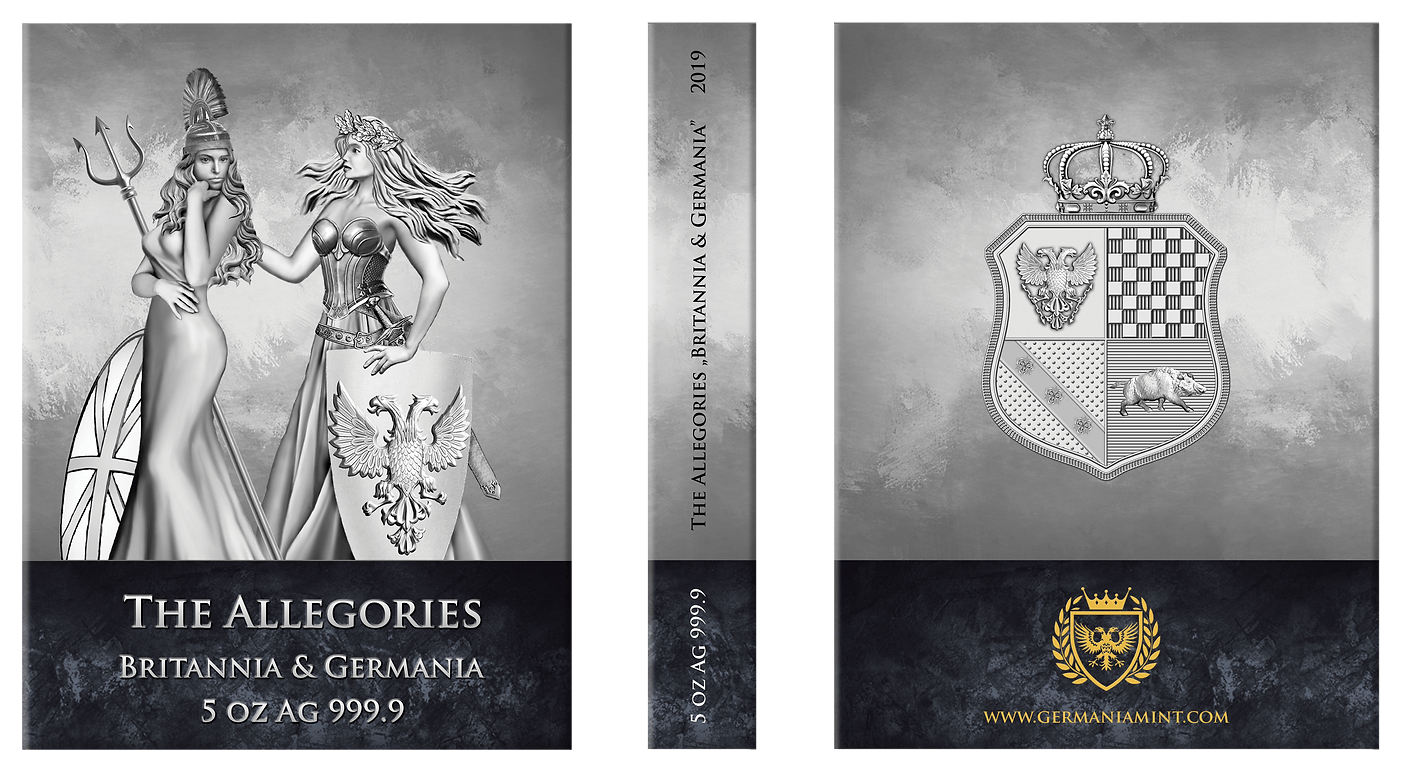 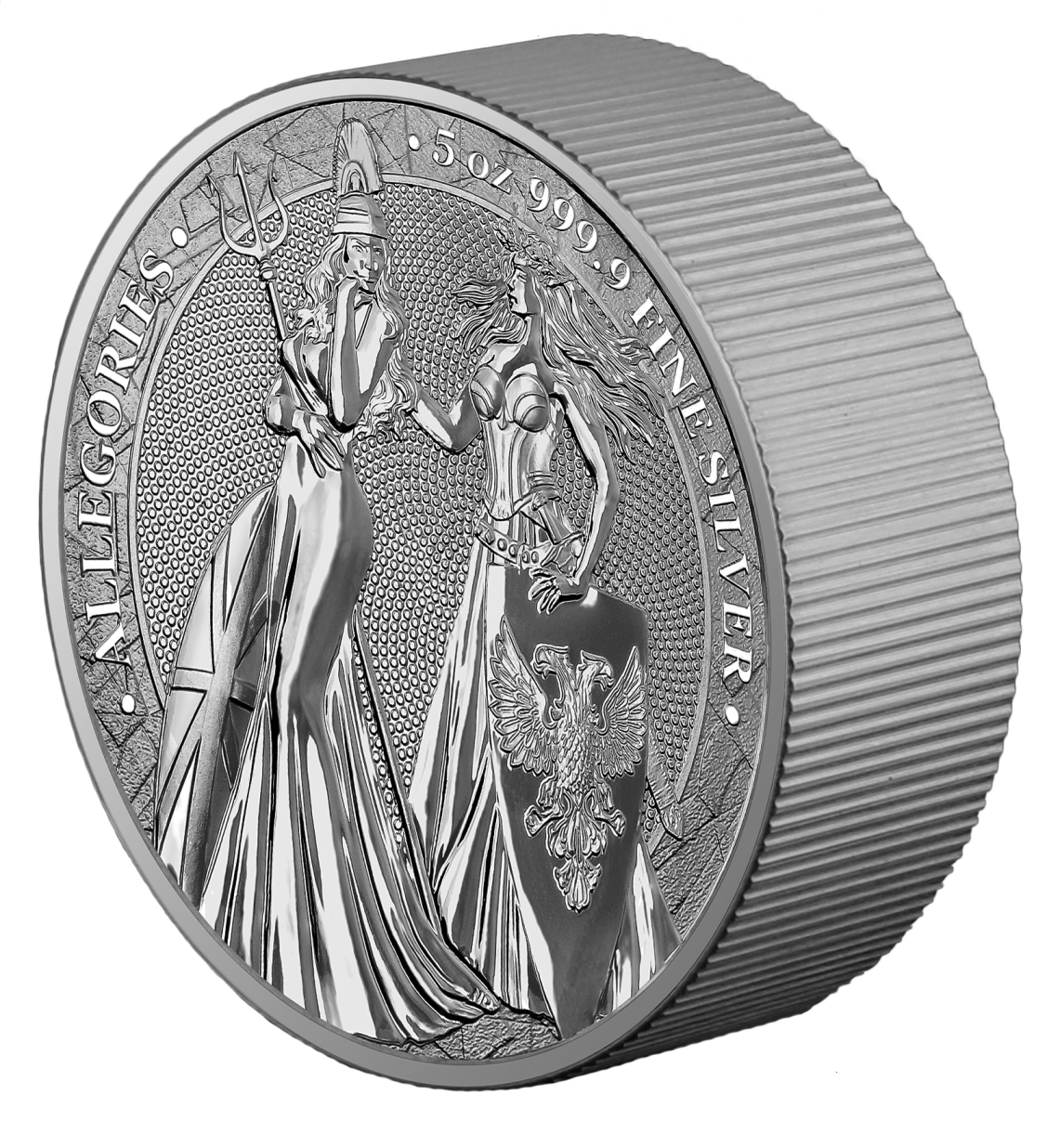 For the first time in the history of numismatics, on the subsequent coins of the “The Allegories” series, Germania will “meet” with legendary national personifications in symbolic circumstances.

Obverse:
The first coin from the Allegories features a personifications of two historical lands: Germania and Britannia. On earlier coins Germania has preserved a laurel wreath with a shield. This time her sword rests at peace in a scabbard attached to her waist and she reaches out her hand in a sensitive gesture to Britannia. So far Lady Britannia was presented as a beautiful and thoughtful woman. On the new coin she is surrounded by her characteristic attributes – a Roman helmet with a plume, a shield and a trident, which refers to the former maritime power of her land. We can search for symbolism of these two Amazons in the historical context as well as in the current events…

The symbolism included in this design represents the moral principles and noble values, which are relevant till today.

A wreath of oak leaves symbolizes loyalty, stability and national unity. In the past, only people who wielded enormous power – spirit, muscle or magic, could wear it.

The shield is a defensive part of the weaponry used by horse and foot formations from the Bronze Age through antiquity to the Middle Ages. It has accompanied the images of the greatest warriors as it is an attribute of gods and heroes, symbol of truth, faithfulness and trust.

The crown in heraldry is a symbol of authority and nobility or chivalry as well. The above mentioned symbols correspond directly to values represented by Germania and Britannia. Please take into consideration that following coat of arms is a figment of imagination and it does not represent any noble family or kingdom.

Because Germania is a historical land and has never been an official country, we decided to create our own interpretation o its coat of arms.

The crowned shield has been divided into four parts, from which each has a traditional meaning, precisely defined by heraldry.

In the top left corner of the crest there is the Germania Mint’s Bicephalous eagle – a Roman mythology symbol associated with Janus, the god of all origins, guardian of doors, gates, passages and bridges, the patron of contracts and alliances. Heads facing the opposite symbolize the past and the future.

Right upper corner is decorated with a check pattern that refers to wisdom and prudence – every good sovereign should be distinguished by these character traits.

On the left bottom corner of the shield there are three flowers on a gold ribbon. They hide three values determining a strong and independent nation – unity, integrity and freedom.

On the right bottom corner of the crest a wild boar appears – a very popular and respectful animal in Roman Empire, which is a symbol of mightiness and power. At least three famous Roman legions are known to have had a boar as their emblem – Legio I Italica, Legio X Fretensis and Legio XX Valeria Victrix.